How to Evaluate a Basic Coin Collection

Looking for an appraiser to evaluate your coin collection or other items? Search our database of ISA members to find a certified property appraiser near you. Find an ISA Member »

Many appraisers dread encountering a client’s coin collection, where there might be thousands of individual items. Appraisers are worried they’ll miss something. But thankfully, most accumulations of coins in normal households aren’t particularly valuable and evaluating a basic coin collection is within a trained appraiser’s skill set.

Step 1: Gather all of the coins in one place. At the core of Marie Kondo’s popular book The Life-Changing Magic of Tidying Up: The Japanese Art of Decluttering is to assemble items of the same type together before you start making decisions. The same can be said for a coin collection, which is often scattered across a house in various cigar boxes and purple Crown Royal liquor bags. Get everything numismatic – in other words coins, paper money, tokens, and medals – in one place. Then you can sort items into a save pile for items with numismatic (collector) value and spend categories for items valued at-or-near face value.

Step 2: Ask about the client’s collecting. Where did the collector purchase their coins? Directly from the U.S. Mint or through dealers? Is there an inventory? Are there invoices or are these coins just an accumulation that was gathered over time? These questions will help you decide whether you need an outside expert or if you are competent – or can acquire the necessary competency – to tackle the project yourself. A good question to ask: what do you think are the most valuable coins in the collection? A generalist appraiser can likely handle a group of modern U.S. Mint issues, but might not be equipped to appraise a collection of ancient coins purchased from German dealers in the 1950s. It’s best to discuss this openly at the start rather than be surprised later.

Step 3: Discuss the client’s expectations. Does the client expect for you to go through every roll of coins and individually itemize every coin in your report, or just provide summary line-items utilizing grouping? Since even low-value coin collections can have thousands of items, make sure you know in advance what the client expects. Since you’re billing for your time, solid communication and getting on the same page are essential to avoid unpleasant surprises later. 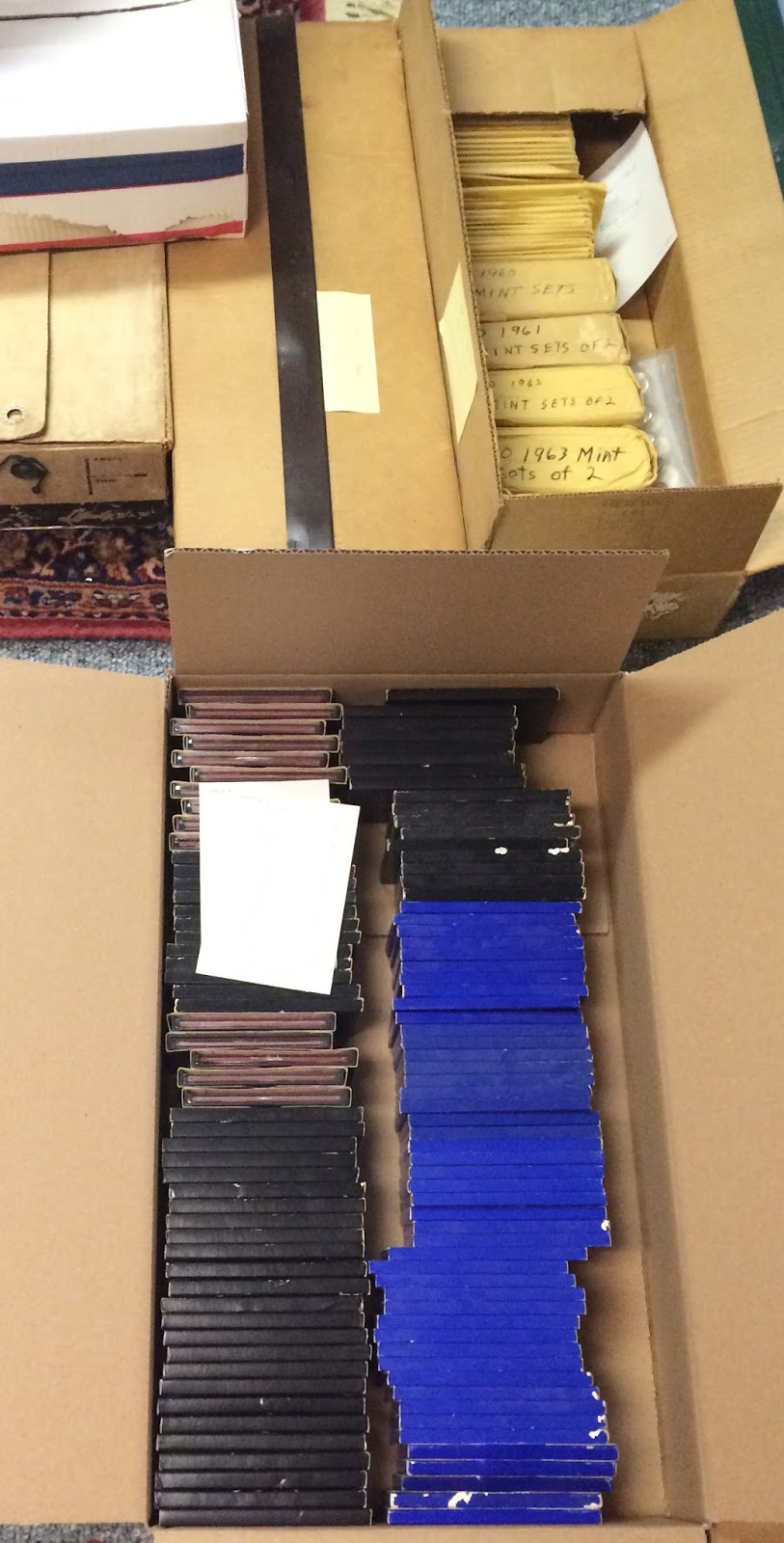 One area that appraisers see all the time are Proof and Mint sets. Many people purchased a set or two each year in the 1970s through 1990s with the intention of giving them to their children or grandchildren, who may or may not have had any interest in collecting.

Proof coins are produced for sale to collectors and the Proof sets contain an example of each denomination struck in a given year. Sets from 1936 to 1942 had relatively low production numbers and are expensive – for example, a 1941 set with the cent through half dollar denomination can be worth $1,500. Mintages increased with 1950 to 1964 Proof sets, which have a silver dime, quarter dollar and half dollar, along with examples of the cent and 5-cent denomination. Most frequently, you’ll find sets from 1968 to present day. Assuming that they’re in their original Mint packaging with a cardboard outer box housing the plastic container with no cracks, they can be valued according to price sheets for most purposes.

U.S. Mint sets contain uncirculated examples of each year’s coins for every denomination issued or circulation from each Mint. Since 1959, these sets have been sealed in protective plastic envelopes. No Proof or Mint sets were issued in 1965, 1966 and 1967, with Special Mint Sets packaged in hard plastic holders sold instead.

Reliable pricing references include A Guide Book of United States Coins (better known as the “Red Book”) which is an annual price guide in book form and monthly periodicals like Coin World’s Coin Values. (For disclosure, I serve as a contributor to the “Red Book” and an editor at Coin World, but would recommend both resources regardless). Completed sales on eBay provide useful reference points as well. Dealers often refer to wholesale guides like The Coin Dealer Newsletter’s Greysheet that report on a dealer-to-dealer wholesale market.

Five coin and 6-coin Proof sets produced between 1968 through the mid-1990s are common and as a rule of thumb, worth $5 to $8 each, and Mint sets from this era are valued similarly. Sets with silver coins and Prestige Proof sets which include commemorative coins are worth more. There are a few varieties that can make sets worth more – for example, a 1990-S Proof set where the Lincoln cent is missing the San Francisco “S” Mint mark can sell for as much as $5,000 – so a statement in an appraisal that Proof and Mint sets were not opened and checked for varieties might be prudent. Many collectors kept their sets unopened in the boxes as shipped from the U.S. Mint. Thankfully, these boxes generally state the contents on the outside and it’s fine to value them unopened. But, you may want to note that you relied on the label on the box when identifying the sets.

Collecting trends come and go, as collectors from the 1960s who were into buying coins by the roll can confirm. Proof and Mint sets manufactured and sold by the U.S. Mint have been a mainstay of the hobby for decades, serving as gifts for generations of collectors and non-collectors alike. Here’s a look at some of the factors shaping today’s market for Proof and Mint sets.

Mint production numbers for traditional Proof and Mint sets have been declining, and the Mint has acknowledged that this is a major problem for its collector products revenue stream. These sets have a primary market when an individual purchases them from the Mint or through a dealer who purchases them from the U.S. Mint. A secondary market is created when this initial purchaser sells his or her set.

For there to be a growing market and for prices to rise, there has to be increased demand for the sets. If fewer people collect sets, as the trend is headed, this could spell bad news for already sinking prices in this area.

Dealers now buy many Proof and Mint sets of the 1970s and 1980s for amounts below the face value of the coins in the set, acknowledging the labor involved in breaking the sets up to sell the coins individually or to package them for sale to a wholesaler. The decline in the number of local coin shops means that fewer dealers stock these low-value sets, finding the trouble of maintaining an inventory of bulky $3 sets not worth the potential profit.

These trends can be challenging to explain to clients. Retail price guides are useful for determining retail replacement value – representing the cost to replace a similar Proof or Mint set – but it may not reflect what a client will get when it comes time to sell.

A look at prices for many Proof sets shows sharp declines over the past decade. A 1995-S Proof set that sold for nearly $50 back in 2005 is worth around $10 today and the 1997-S Proof set which was worth $40 in 2005 trades for around $8 now. Part of the reason is that many Millennials who received these sets as gifts in the 1990s sold theirs and created a modest surge in the supply. Another is that in absence of people collecting complete sets of Proof and Mint sets, the premium for these slightly tougher-to-find years evaporates.

There have been a few bright spots – the 2012-S Proof set trades for over $100 and the 2012-S Silver Proof set costs $200 now, far more than their initial sales prices of $31.95 and $67.95, respectively. But the winners are outnumbered by the sets that have seen declines over the past few years. 1981 saw the Mint sell more than 4 million Proof sets, and mintages over 2 million were common in the 1990s with more than 3 million sets sold in 2000 as people celebrated the new millennium and speculated that these 2000-dated sets would become popular in the future. Mintages have gradually declined since, towards 1 million and then finally dropping below 1 million in 2012 with sales of 794,000 sets. The Mint has sold fewer than 500,000 2017-S sets as of the end of 2017.

As more buyers adopt a more minimal approach to collecting, favoring fewer objects of greater quality, the inherent standardization of Proof and Mint sets (each one is the same), combined with the space required to store them, make these sets less attractive to younger buyers. That’s not to take away from the pleasure that many derive from collecting these, or buying one to celebrate a milestone or to give as a gift, but when thinking of the investment potential of Proof and Mint sets, considering future demand is essential.

Steve Roach, ISA CAPP, is an appraiser based in Washington, DC, and Cincinnati, Ohio. He is an expert in rare coins and medals with expertise in European and American paintings, sculpture, prints and drawings.

From the ISA Now Blog